People talk about myths as easily as they do opinions or news. Although well-intentioned as advice, myths are not only untrue, but they are also misleading. In fact, they can be costly and self-defeating for people who want to improve their lives.

Many myths even seem intuitive, which is part of their appeal. Those about cooling, if homeowners take them seriously, can end up costing them more on energy rather than saving on it. Here are seven myths about cooling and the truth behind them.

It might sound like common sense, but it’s not. Closing vents in unused rooms will not enable cool air to simply circulate in the used ones. It actually prevents its circulation. But when you really think about it, cool air does not simply reverse its route from closed vents to travel to open ones. Plus, the AC moves a certain amount of air, which becomes inefficient due to closed vents. Closing vents in unused rooms forces the compressor to work harder, spikes your energy use, and can even cause your HVAC unit to fail prematurely. The reasoning is the same for closing doors to unused rooms in regards to airflow.

There are alternatives if you really want to cool the air only in the rooms being used. Portable single-room air conditioners are one option. Another option is getting a ductless mini-split system.

2. Turning Off the AC Before You Leave the House Saves Energy

Many homeowners are used to turning off electrical appliances anytime they leave the house for any period of time. It’s also common practice to turn off lights and appliances when not using them at home. Because of this, turning off the AC may also sound like a good idea. However, doing so with your AC won’t save you money. In fact, once you return home and turn the AC back on, it will have to work harder to get back to your desired temperature.

There are ways around this, though. The next time you leave the house, turn up the thermostat about 7 to 10 degrees, and then turn it back down when you get home. You can also do so when you go to sleep. However, keep it on “auto” rather than “on” so that the fan won’t continuously run but will turn off when it reaches the set temperature. Turning off your AC only makes sense if you’re going to be away from the house for an extended period, especially if you disconnect it so that it doesn’t use what’s called “vampire energy.”

You can also consider a programmable thermostat so that it can cool the house before you get back home. If you have a window unit instead, you’ll want an appliance timer, if it doesn’t already have one. Newer models have it along with a thermostat.

Contrary to popular belief, briefly turning down the temperature to super-low will not cool the air any quicker. That’s because the fan can’t run any faster than usual, so it heats or cools your house at the same speed. The only exception is “dry mode,” which works for air that’s humid but not too hot.

HVAC systems function from an “on” or “off” state in which the compressor works to get the temperature set and then shuts down until the temperature changes again. In this case, what ends up happening is that your HVAC unit spends more energy blowing cooler air than necessary. Forget to re-adjust the temperature, and you’ll end up being cold.

The exception to this function of conventional air conditioner units is an inverter AC. It contains newer technology that allows the compressor to run at different speeds, and hence, save energy.

4. A Larger AC Unit Is Better

What this means is getting an oversized AC unit, and it’s a bad idea. For one thing, it will reach the cooling load too quickly before it shuts off. It won’t run long enough to properly cool the air and dehumidify it, making it inefficient. Because it has frequent start-ups and shut-downs, the unit will go through more wear and tear and you’ll have higher energy bills.

Another issue is that a larger AC will not solve any issues with air leaks, ductwork, and insulation, which need a total professional HVAC system examination. AC size depends on the cooling load of your home, which considers the following factors:

5. Fans Can Help Cool the Room

Fans only cool people, not rooms. A fan works by causing your perspiration to evaporate. It’s great for fast relief from hot or humid air, but as soon as you turn it off, you’ll be hot again. Compare that to an AC unit that will shut off when the proper temperature is reached and then come back on to cool it down. Having a fan on will help you save on energy bills, though, since a fan allows you to turn up the thermostat higher than you would otherwise.

6. Replacing Old Windows Will Help You Save on Energy Bills

Sometimes windows can have leaks, especially if they’re old. Replacing them will fix the leaks and, if they’re new windows, they will likely be more energy efficient. Unfortunately, it takes a while to start seeing the savings after making the costly investment in energy-efficient windows.

Another issue is that window leaks are just one factor in higher energy bills. You also need to consider the various components of your HVAC system.

7. Your HVAC Doesn’t Need Maintenance If Nothing Is Wrong With It

Sure, your HVAC system could be running well, but what’s going on inside of it? All of its parts need to be in the best shape, and neither function nor sound are good indicators of being in the best condition. If there are any issues starting to occur, and you let them go on for too long until it’s too late, what would have been a simple checkup will turn into a repair. You need to have an HVAC maintenance check once a year at a minimum.

The Experts Have Heard the Myths, Too

Because of their knowledge and experience, experts know if homeowners are telling factual information about cooling or not. The most trustworthy source for cooling is your local HVAC professional.Although there are some things you can do yourself to keep your HVAC system in good condition, such as changing air filters and cleaning ducts, there are others that only a professional can handle. We at Fahnestock HVAC strive to inform you of the best practices for your HVAC system so that you can make the most of it. Our professionals are NATE certified and thoroughly trained. If you need maintenance, repair, replacement, upgrade or new installation, contact Fahnestock HVAC in Wichita.

Excellent pay and work environment. Fahnestock is the best residential / light commercial Service department in the area and we have some of the best technicians AND customers in town!
Benefits include: 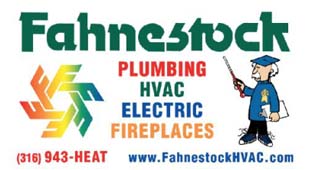